Sharing what we know

How many people can lay claim to having taught Stephen Downes something new? I have often wondered where he goes to learn new stuff. Then as I commented on this photo of his on Flickr last night, it occurred to me that this was the second time I had been able to provide him with a piece of information. 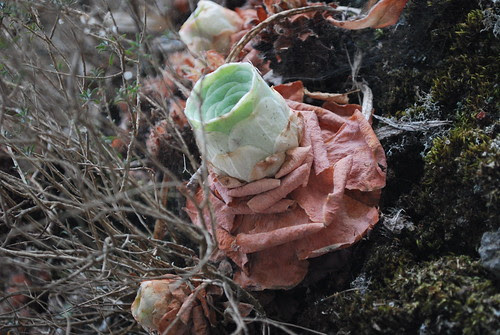 It looked similar to the sort of thing my stepdad grows, so a little bit of rooting around provided a likely answer.

Oddly, the previous time was also to provide the name of a plant. This plant: 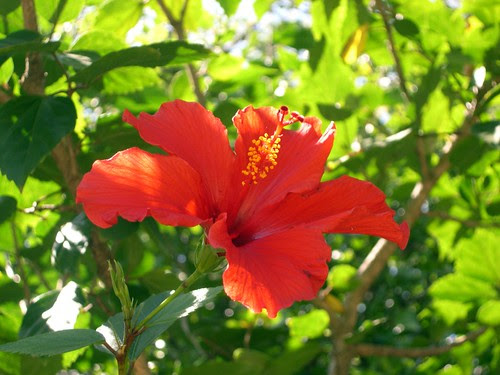 I say oddly, because I am the most botanically ignorant member of my family (my parents are complete botanical and ornithological 'anoraks', as are all my aunts and uncles and most of my cousins). This one was dead easy, though, since the plant is one I grew up with and which abounds in South Africa and other hot climates.

The hibiscus (bottom picture) came to my attention when Stephen mentioned on his OLDaily blog that he had uploaded the photos from his trip to Southern Africa. Of course, a girl from southern Africa could be depended on to make a beeline for them! The aeonium (top picture) I found because Stephen linked to it on his Facebook status last night, saying that he wondered what it was. Not thinking for a moment that I might know, I followed the link out of idle curiosity... et voila!

Somehow the thought that someone as knowledgeable and highly regarded as Stephen can learn something (two somethings, mind!) from li'l ol' me puts things in perspective.

But no-one is keeping score.

Photos by Stephen Downes can be seen, with many others on his Flickr photostream.

Posted by Anonymous at 6:26 pm

Ah! The traditional view of the teacher. I see it here.

That Stephen Downes, the 'teacher', knows so much and teaches and shows us so much that he cannot be taught anything new or corrected in his knowledge is not just a teensie bit like the traditional view of the teacher.

In fairness to Stephen I have (quite often) read in his writing where he admits to learning something new or to being corrected. After all, he does put a raft of people in high regard so presumably he learns from them.

But, okay, he's an icon. But we make him that. Stephen is just Stephen. The position so often adopted by teachers and the like - that they are the font of all knowledge - is a fateful trap for any knowledgable person to fall into. It makes me think: how many teachers stop learning anything new if they get to that stage?

Humility goes a long way to assist in dispelling such an erronious culture.

Interesting you should say that Ken! Check this out!

However, I have to say that, however he sees himself, I don't see Stephen as my teacher in any traditional sense of the word. Granted I have learnt a great deal from him, most of it parasitically.

However, I have enormous respect for the amount of data the man manages to assimilate, process and connect. I am impressed that I, with my far smaller store of knowledge should be able to hold some information that he does not, so that we get some form of Venn diagram rather than that my knowledge can be diagramatically represented as a subset of his.

Like you, I haven't the foggiest idea what the names of flowers are (although I did know hibiscus because I lived in Costa Rica for a while). I usually go with "that red flower" or "that strange looking short flower with pink on it." When in doubt, I just call it a "mum" as it seems most of the flowers in this part of the world are some sort of mum.

However, I know that if I do need to find the name there are some really good places to look (one being 4-H, another being botanical societies).

@virginia Actually, I'm not entirely dreadful at plant names - just in comparison with the rest of my family. My husband is dismal, however - not a clue!