Teaching us how to vote

For those who don't live in the UK, you may be unaware that we go to the polls on 6 May.

I'm very conscious of the fact that mine is the only vote our family gets. It's somewhat ironic that I need a permit to live in this country, but I get to vote in the national elections. On the other hand, my husband and sons are EU citizens and need no such permit to live here, but they can only vote in local and EU elections.

Be that as it may, it's been quite interesting to see the methods being used to try to help me decide how to cast my vote.

For the first time ever, there have been presidential type TV debates featuring the leaders of the three main parties. Since we're not voting in a leader but a party, this is fairly odd, because it panders to the personality brigade. I tend not to watch the debates themselves, but to read up on the summaries afterwards.

There are also several quizzes online, where I can identify my stance on a series of issues, and discover which party's policies most closely match my own.

Then the Christian Institute has provided listings of how each MP has voted on a series of moral issues, so that I can decide whether I'm happy that my views are being represented in Parliament (whether or not you agree with the CI's estimation of what constitutes morally right and wrong decisions, it still helps to provide a sense of where your MP stands on sensitive issues).

Yet in spite of all this, apparently only one in three first time voters will go to the polls. Apathy is a real issue, here. Fewer than two in three voters overall are likely to cast their vote. So, chances are that the party that gets in will in fact represent about 20% of the country's eligible voters. That's hardly a strong platform on which to lead a recession-ridden country into an uncertain future. 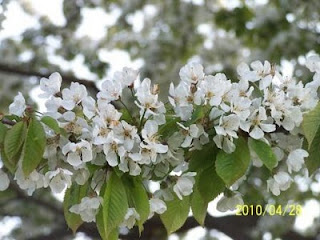 The Natural History Museum is currently running a census of cherry trees in Britain. The idea is for people to go on walks and spot cherry trees and then record them on a map.

Guidance is provided on how to identify cherry trees and how to distinguish between the various types.

I really like these attempts to engage the wider public, and to publish this user generated content. My parents regularly participate in similar exercises in respect of birds and plants in South Africa, setting off at ridiculous hours of morning to count parrots or heading off on some jaunt to record clivia numbers (they're very keen on clivia, my folks!)

At the moment, my town shows only four cherry trees, two of which I recorded. I know for a fact that there are hundreds more. Let's hope that we see more being added.

If you're based in Britain, or even if you're just here for a conference or business trip, why not add to the census?

Most influential women in tech?

The Fast Company has posted their 2010 list of the most influential women in technology. Of course, there will be those who are surprised to have been included, and those who are furious not to have been listed. But the list makes for interesting reading.

The whole theme of reward or cause-and-effect is exercising my mind lately. Mostly it just goes in circles.

I'm not about to disinter Pavlov, but I can't help feeling that we should be looking to reward desired behaviours in education, in the workplace and even in society in general.

Obviously, the nature of the reward would have to be made appropriate to the context. I can't see us giving a newly appointed manager a star for sharing his crayons with the person at the next desk.

Recently, my elder son asked me to intervene in a situation for him. He had lent a sum of money to his younger brother. It seems my younger son was going to repay this debt at £5/month, interest free. But that would take several months, by which time my elder son will have finished school and started his gap year in Australia. So he asked if I would give him the money, and let my younger son repay me at this rate.

I agreed, but I shouldn't have. The thing is, my elder son lent the money to his brother without establishing the terms of repayment first. This is not a very wise thing to do, and in taking over the debt, I have rewarded his poor choice. It isn't a lot of money in the grand scheme of things, so this would have been an ideal opportunity for a bit of tough love. A lesson to be learnt at no great cost.

I'm too much of a softie!

As I see it, the exam system also rewards the wrong behaviours. I know some kids who seem pretty dense, to be honest. They seem to know nothing about anything, and are utterly unable to hold a meaningful conversation about anything of substance. And yet they are in the top set for all their subjects at school, raking in the A grades. If education is preparation for life, the behaviours that should be rewarded are surely things like the ability to find information on a given subject, establish whether information is valid/reliable, apply information to a situation that does not exactly mirror a case study, work as a team, delegate responsibility, meet a deadline, be innovative with limited resources, overcome obstacles. You know... real life stuff.

I used to share a house with a few long distance truck drivers when I was a student. These guys were paid a certain fee to haul a load from point A to point B. They would get a bonus for doing it extra quickly. Not only that, but if they managed to shave a day off the delivery time, that gave them an extra day to start earning on the next project. So any time saved gained double rewards, financially speaking. So these guys would drive for 24 hours at a stretch, overdosing on caffeine in attempt to stay awake. There is no doubt that they constituted a hazard to other road users and themselves. In fact, I heard a couple of years back that one of them had been killed in an accident.

But the system was such that they were rewarded for this behaviour.

I have heard many tales of teenage girls in the UK, fed up with their parents restrictive rules, deliberately becoming pregnant in order to qualify for additional benefit payments and perhaps get a council flat. I'm not pretending to know a better way to respond in this situation, but it strikes me that this is another example of rewarding the wrong behaviour.

Like I said, my mind has been going in circles on this subject. I'm not sure I have any constructive answers, but I guess a change to the education system wouldn't hurt!

I was recently interviewed by Blog Interviewer in respect of this blog. You can see the results here.

I don't know if you noticed my shiny new badge on the top left of this blog. I have no idea who nominated me for it, but I presume it must be someone who reads this blog regularly, so no doubt you will read this post. Whoever you are, thank you. I'm flattered.

See here to learn about the other 49 recipients.

Stepping out of the boat

I am somewhat behind on my reading, which may explain why I have not previously seen this article from Megan McArdle in Time (thanks to my husband for the pointer).

McArdle talks about the importance of safe failure to the economy. In fact she says, "failure is one of the most economically important tools we have". She bemoans the fact that, "instead of celebrating all our successes in building systems that fail well, we've become wedded to the fantasy of a system that doesn't fail at all."

Isn't it interesting how the very things we have been saying in respect of learning and education are being said here about the American economy? And it's hardly surprising, really. If we create an education system that stigmatises failure, we can only expect that that stigma will carry over into all other arenas of life... including the economy. It's all linked. It's all part of the one thing, the big picture.

This puts me in mind of the story of Peter walking on the water (Matthew 14). Preachers often use this story to illustrate weakness, lack of faith, etc. I tend to think, hang about a bit... what about the eleven losers in the boat who didn't even try? Peter tried. Sure, he failed after a few steps, but he had an experience none of the others could claim... because he gave it a shot. We need a few more Peters, I reckon!

Let's be about encouraging people to step out of the boat, and about catching them when they start to sink.