On the 'zone of absurdity' 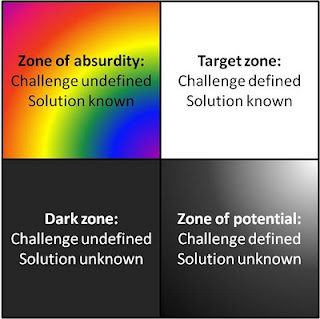 In my last job, I worked with a director who was a font of witty labels. One of these was the 'zone of absurdity' (the other labels in the graphic are mine), which arose during a discussion on the stages of performance support.

Initially, we bumble about in the dark. Things aren't going quite as they should, and we're not sure why. During this phase, the biggest obstacles are
During this stage, the important thing is to find out what is going wrong, not to attach blame.

When we figure out what the problem is, we move into the zone of potential. Now that we understand the problem, we can figure out how to solve it. The AA and various other support organisations will tell you that admitting what the problem is, is the most important step. In a blame culture, it is hard to achieve this stage, and even harder to stay in it. In this stage, we need to stay focused on finding a solution. What have we already got that we can use? What do we need to set in place? What resources do we need? All that malarkey. We're aiming for that optimal, target zone.

This is not to say that everything runs smoothly in the target zone, but we stand a far better chance when we're all in the know. Of course, this is an almost mythical zone, because before we get here, the challenge changes and we start again.

But my biggest bug bear is the zone of absurdity. The zone in which the solution is known, although the problem has not been defined. Sensible people like you have never even visited this zone, of course, so you can't even imagine what it looks like. Well, I encountered a small example of it yesterday, which I will share with you.

I was in the grocery store picking up ingredients for last night's dinner. I had only a few items in my basket, so I headed for the self-service checkouts. One of the items was a single Granny Smith apple. I weighed it and placed in the bagging area, as instructed by the faceless lady who voices the tillpoint programme. But it seems she wasn't really ready for me to place it in the bagging area, because she had a slight seizure. The supervisor came over and set about impressing me with her speed and efficiency... dashing headlong into the zone of absurdity.

She didn't even look at the instruction on the screen. She didn't even pause to listen to my explanation of what had happened. She logged in with her magnetic key thingy, pressed this button and that button and sashayed off again, not even noticing that a completely different error message had appeared on the screen. I had to call her back. With equal speed, and with similar lack of interest in the details, she pressed a second sequence of keys. At this point, there was no error message, but I now had a Granny Smith apple in my bag, although I hadn't been charged for it. I removed it from the bag and gave the voice-over lady another seizure. She begged me to return the item to the bag, even though doing so meant she would be giving it to me free of charge.

As the supervisor headed to my till for a third time the security guard standing near me said, "She isn't really paying attention, is she?"

I'm sure the supervisor lady thinks she's very efficient. She bustles about, pressing keys faster than anyone. But she makes no effort to identify the problem before she applies a solution. Net result? Three visits to a single till to resolve the issue of one Granny Smith apple worth 27p.