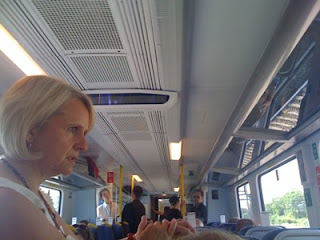 The train I took into London today got a flat tyre or something about 10 minutes outside of Euston. There we sat, for over an hour, with no air conditioner and totally sealed windows and doors. The guy in the white shirt in the background was literally wringing wet by the time the rescue train arrived, with it's mercifully working air conditioner... and LOOS! The lady in the foreground was travelling with several female relatives to Wimbledon. One of the relatives had an aerosol can of some or other cooling spray which they all kept using liberally, spreading who-knows-what into what little air there was. The elderly lady next to me came over all faint and I had to get her out of her seat and into the general area where she could feel a little less claustrophobic.

I made my appointment by the skin of my teeth. I must have looked a fright... and probably didn't smell too good, either!

Blow me down if the tube I took back to Euston after my appointment, didn't also come to a halt between stations. This time because the driver of the train ahead of us took ill in the heat and a replacement had to be found. It wasn't quite an hour that time, but apparently it was necessary to carry out a series of emergency stops in quick succession thereafter 'for safety reasons'. When you're hot and sticky and irritable, the last thing you want is to be thrown towards the front of your carriage at about mach 1 several times.

Sigh. It's good to be home!