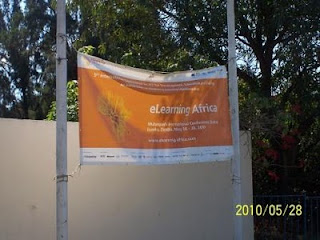 I am shattered at this point, and unlikely to be coherent in my writing or organised in my thinking, but here are my early impressions of my first eLearning Africa conference. I will unpack some aspects in greater depth in due course. 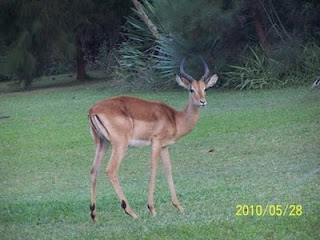 Of course, everything runs on 'African time'. The shuttles are late, the dignitaries are late, the food is late. The queues are long and the sun is hot, oh, and impala stroll around the grounds of the conference centre. This is very definitely Africa.

There is a craft market on the grounds as well, but my only visit to it resulted in my being mobbed on all sides by insistent, wheedling vendors, each with a sob story about transport money or sick mothers/children. I struggle to cope with that kind of thing, so I fled empty-handed, to my deep disappointment.

Also, there have been displays of drumming and dancing every day. The costumes are charming and the skills demonstrated are impressive. The Europeans in attendance were entranced. But one bishop standing behind me in today's lunch queue labelled it an embarrassment. He considered it irrelevant both to elearning and progress in general. I guess he saw it as a perpetuation of the stereotype from which Africa is trying to escape. He was adamant that this tradition was unhelpful to the nation. I guess I can see his point.

The shuttles have been utterly haphazard. Each one is manned by a driver and a... well, I don't know what the other guy is, to be honest. I do know that the 'other guy' on our shuttle is about the most efficient man in Lusaka and his frustration is running high at the ineptitude. We often arrive at one hotel (having been sent there by the handlers back at whatever co-ordination centre exists) only to find another bus (or two) at the same place, while frantic phone calls from other delegates indicate that their hotels have not been visited by any buses at all.

The lunches have also proved tricky, due to the fact that hundreds and hundreds of people arrived unexpectedly to enrol for the conference, causing a major headache for the organisers.

This has proved by far the biggest eLearning Africa conference to date. The Zambian government is enormously proud of this fact, but I'm not sure that it is an unequivocally positive fact. African culture is one of natural deference to elders in society. As a consequence, many of the attendees are, well, venerable is the most polite term I can think of. It is evident that they have little or no connection with the subject matter under discussion and several of them seem to doze their way through the sessions.

At the other end of the spectrum, for some reason, the minister of education has seen fit to have hordes of children in attendance. For almost all these children, English is their second language and both the content and the language used in the presentations are highly unlikely to be engaging for them.

My biggest surprise has been the source of the most active and outspoken resistance to the concept of using elearning in education. It has been the intelligent, articulate, savvy early-20s crowd who have stood up and declared that Africa is not ready for elearning, or that the culture of elearning is not a good fit. I will unpack this in greater detail in a review of my own session at a later date.

I have also been surprised at the complete lack of understanding of the concept of 'workplace learning' or 'corporate learning' (pick your simile). Not just the term, but the 'thing' itself... even when you call it staff training. If it isn't formal education conducted by an accrediting institution, it isn't learning. More of that anon, too.

But everyone is incredibly friendly. Total strangers chat like old friends. The Zambians are astonishingly gracious and willing, but they are hamstrung by the fact that an awful lot of stuff just doesn't work... or doesn't work properly, from the Internet connection to the power supply to the roads (oh, and don't bother trying to cross the road at a pedestrian crossing, those white stripes appear to be no more than just a fashion choice!).

I have readily been accepted as an African, which took me by surprise. I call myself an African woman, which is unusual for a white South African (it also very unusual for people from the extreme north of Africa (Saharan and supra-Saharan Africa). For many, even in Africa, African = black, but when I introduce myself as and African girl living in England, this has been accepted without question and with a great deal of approval in some cases. Just today at lunch, I was chatting with two Zimbabwean women who were seated beside me, when a Kenyan man called out from the other side of the table, "You know, you are a very African woman!" He explained how, watching my body language and listening to my intonation, he was suddenly able to see beyond my fair skin. I assured him that I saw myself in the same light and that I took this as a huge compliment. The conversation at my table flowed fast, and in numerous directions simultaneously.

The food has been very much local fare, and no explanation is forthcoming as the ingredients of any of the dishes. I asked what was in a dish called chiwawa and was told, "Chiwawa". I was at a loss to explain that I already had this much information, and needed more (I have since learned that it is made of pumpkin leaves with onion and tomato).

I have made many new contacts, but I am doubtful as to whether it will lead to business opportunities.