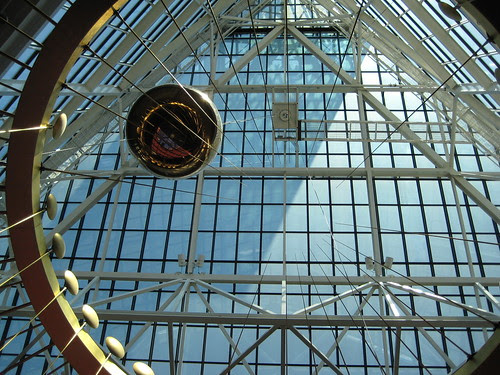 You know how I have been banging on about how work-related learning solutions need to be focused on what people need to do in their day jobs, and we need to stop burying them in theoretical head-knowledge?

Well, I'm wondering if the pendulum hasn't swung too far in that direction in some sectors.

I recently spent an evening chatting to a head teacher and her teacher husband. Both are about my age. The head teacher especially was expressing concern about the sort of skills being imparted to trainee teachers at college. According to her, newly qualified teachers (NQTs) and student teachers are all very well versed in a procedural approach to teaching. Almost to the level of say x, then do y, then say z.

She explained how, when she was training, she learnt a lot about how children learn. About how people respond in certain situations. She used this theory to develop an understanding about the sort of conditions that would be conducive to learning and to inform her teaching practice. What she wasn't taught was a great deal of nuts and bolts "how to teach". Her view is that NQTs now come equipped with a great many focused procedural skills, aimed at assessing pupils against the national standards, but little initiative. While they have strategies to deal with situations, they have little understanding of how those situations might have arisen in the first place.

I have seen some of the learning materials aimed at providing CPD to teaching-practitioners, and a large proportion of it would seem to be back her argument: if x and y conditions are true, then proceed as follows, if not, then take this course of action.

In the past, it always seemed to me that work-related learning on offer to existing/qualified practitioners was action-based, whereas the preparatory learning undertaken in the formal sector provided the grounding in the form of underlying theories. Is this approach falling away as we become increasingly wedded to informal learning?

Let it be be said that I am a fan of action-based learning, just-in-time performance support and all the related mechanisms for empowering people to do their jobs without dragging them through a raft of teaching. But I wonder if we aren't getting a little lazy on the theory side. I have railed on about the 'what' and 'how' in the past, pointing out that the 'when' and 'why' are equally important. I wonder if, even in some of our preparatory programmes of study we seem to be overly focussed on the what, when and how and forgetting the why.

This puts me in mind of a (possibly apocryphal) story I heard who knows where, about a business analyst recently brought in to streamline the processes within a long-standing manufacturing company in London.

He looked at the forms that had to be completed at each stage and identified several changes that could be made. On one form, there was a box in which the supervisor of every shift was dutifully entering 'O'. There was a blur next to the box that must once have been legible text, but copies of copies of copies had seen to it that it was now impossible to identify what was so consistently being rated 'O' every day. The man asked several of the supervisors and none could explain what the box represented. All they knew was what they had been told to enter in that box. Much detective work unearthed a box in a warehouse, which contained the original master copies of all the forms in use in the factory. It seemed that, every day, the shift supervisors were dutifully recording that manufacture had been interrupted by zero air raids that day!

If no-one knows why we do a thing, are we not placing ourselves at risk of 'this is the way it's always been done' with no-one having the courage to change something, just in case it turns out to serve some vital purpose with the potential to bring the business to its knees?

Great post, Karyn. But don't you think "knowing why we do a thing" is a bit different than theory? It's still practical information...

@Cammy - Hmm. Yes and no. The 'why' is likely to involve some of the underpinning theories if it is to be more than just a superficial look.

Your post made me think of a recent article in the New Yorker magazine in which Malcolm Gladwell discusses what makes the best teachers so great and how difficult it is to predict who these will be during training. If you have not yet seen it, I'd recommend you take a look at the piece. Dec. 15 issue, pp. 36-42.