Today has been declared 'save the springbok' day in South Africa. There are moves afoot to do away with the springbok emblem for the national rugby team.

There are those who see it as symbolic of a racist regime, and want it abolished. 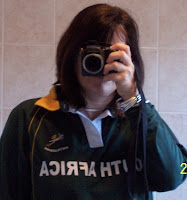 There are those - Nelson Mandela among them - who see it as the symbol of the national rugby team, current holders (for the second time) of the world cup - regardless of the colour of the faces of the players.

Supporters of the emblem are wearing springbok paraphernalia today.

Guess which camp I belong to!