The social side of Learning Technologies

On the first night of the conference, Donald hosts a bash at a pub near the conference venue. There are caricaturists, magicians, pool tables and lots of booze. There is also quite a crush and a high level of noise. This year - perhaps because it was the 10th anniversary - the free bar stayed open until long after I had left. Not that my fruit juices were going to break the bank anyway!

So what's the point of this? Is it just a jolly?

During coffee and lunch breaks at the conference, it's heartening to see the networking that takes place, but I suspect the social adds an extra dimension to the conversation. Stopping to watch one of the card tricks, you might find yourself next to someone you've never met before, and, as you speculate on how your signed card found its way into the locked box that was on the floor the whole way through the patter, you have an opening for a conversation. While you may feel a little reticent about introducing yourself to someone whose face looks vaguely familiar, the fact that the person is holding a caricature of him or herself provides you with another conversation opening - "That's pretty good, actually" or, in my case "Gee, that could just as easily be Sarah Palin!"

The fact that many of us speak with longing of having the chance to meet face to face is an indication that this conventional medium has value beyond what you learn in the presentations. There is such a long list of you I want to meet in person and, not being shy, I would have absolutely no reservations about starting up a conversation with you. In fact, you might find yourself being thoroughly hugged! You have been warned. We meet so often in this space, that some of us have become friends. In spite of my rude foot-in-mouth announcement, I felt no awkwardness about hugging George Siemens at our first meeting last week (fortunately, he seemed unfazed).

But I'm not typical, and the ice breaking quality of a drink or two, some snacks, light entertainment and a game of pool, really help to cement the relationships begun during the conference or online beforehand.

So here's my caricature. Whaddya think? 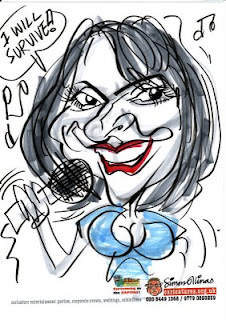