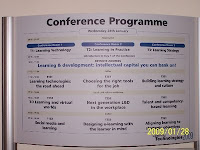 I am back in my little office at home after two whirlwind days of Learning Technologies 09 conference. I have to write up a report on Track 2 (learning in practice) and on George Siemens's keynote, which will no doubt be published somewhere. Once I've written the report, I will probably unpack a few of the sessions in greater depth. But I thought I'd just unload some of the initial swirling impressions... in no particular order.

You do look like Palin and you look so fresh. Interesting points,looking forward to the detailed versions of these. I am taking a break but am finding my interest in learning deepening as I read more and more each day about mind, learning and retention. It would be surreal to figure out a way to retain all that we learn. Learning is application but not retention? As I write this I learn about learning! Thanks for sharing.

My own random reflection would be to wonder what the people around us thought when I came over to say hello, and you barked "on your knees boy!". Shall we leave them to guess?

@Rina Trying to decide whether to be flattered or offended. My husband says it's no bad thing to look like Palin - as long as that's where the resemblance ends!

@Barry LOL - I didn't even think about that! This is where I demonstrate my non-Englishness by not being inhibited by my surroundings! Yup - let's leave 'em guessing ;o)

Good points you make here! And the one about meeting George Siemens made me explode with laughter (sorry).

@mireille - don't apologise. I full deserve to be laughed at. It's not the first time I've done something like that, either. 50 HP mouth, 5 HP brain.

@barry Oh hush! Well, at least I don't pretensions to run a country!