This doubles as today's pic of the day. 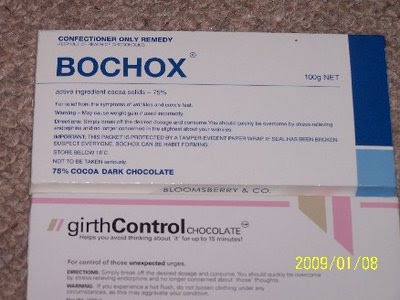 I'm a sucker for clever below-the-line marketing. I discovered these chocolates about a month before Christmas. Inside the packaging is fairly box-standard chocolate - plain and milk - but, oh, the packaging! Each slab has a cardboard 'wrapper' and most of them are made to look like medication. As for the blurb on them...!

According to the text on the box, Bochox is a 'confectioner only remedy' which you should 'keep out of the reach of chocoholics' (too late!).

It is 'for the relief of wrinkles and crow's feet'. You are directed to 'simply break off the desired dosage and consume. You should quickly be overcome by stress-relieving endorphins and no longer concerned in the slightest about your wrinkles.'

But far and away the best bit is in block capitals:
IMPORTANT: THIS PACKET IS PROTECTED BY A TAMPER-EVIDENT PAPER WRAP. IS SEAL HAS BEEN BROKEN SUSPECT EVERYONE. BOCHOX CAN BE HABIT FORMING.

The other chocolate is called girthConrol, which allegedly 'helps you avoid thinking about 'it' for up to 15 minutes!'

There is also a slab featuring a teddy bear on the wrapper, which declares that 'chocolate makes everything bearable'. According to the manufacturers' website, there are several I haven't seen at my local supermarket (not really surprising since Bloomsberry & Co appears not to have a UK base). But of those I have seen, one of my favourites is part of their mother's day range. It's called the marital bliss bar, with a line down the (ahem) centre, with each side labelled 'his half' and 'her half' respectively. 'Her half' is about twice the size of his. Sadly, that one is a dark chocolate and neither my husband nor I are fans - otherwise Santa would most assuredly have delivered one to him!

The website itself is quite fun - although, once you get to the actual text, it's a bit of a letdown.

So, there you have it - an inexpensive gift idea with laughter included in the price.