pic of the day - charming! 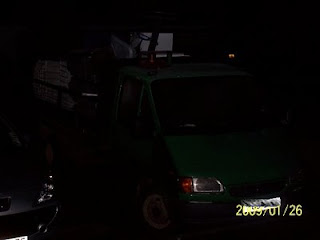 At about lunch time today, I returned home to see a man pulling this truck up outside my house... in my husband's parking spot. He got out and disappeared. I expected him to reappear some time later and drive away. He has not yet done so and it's now 11:30pm. The vehicle is fully taxed, and since we have no official claim to the parking space, there are no grounds on which to report it to the police.

A neighbour tells me the man is a Gypsy (a term I gather is still allowed in the UK, as long as it is accurately used) and fairly well known in the area as a scrap dealer. What worries us is that the truck is loaded with washing machines, fridges and exercise equipment, none of which are secured in any way. A temptation for an opportunistic thief. And I don't want opportunistic thieves getting the idea that this area is a good place to ply their (ahem) trade! I'm also not keen that said opportunistic thief might drop a washing machine on my car seen to the left of the picture!