Pic of the day - my dog read my Bible! 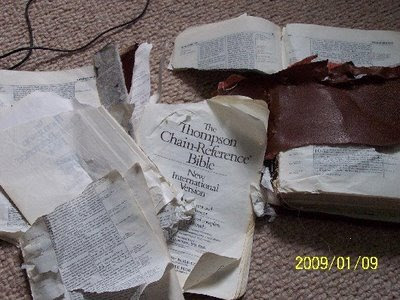 She found it on the couch and read all the way through to Deuteronomy.

Of course, I see the funny side of this, but I have had this Bible for 20 years. My husband bought it for me as an early birthday present in 1988, when we had been married 6 months. I had had a terrible day and arrived at his office in tears. He took me to a nearby Christian bookshop and bought this for me. We were broke at the time, since I was a 'resting' (read unemployed) actress and he was earning a pittance. It was an expensive gift, a huge sacrifice on his part. And he inscribed the flyleaf in his programmer's scrawl: 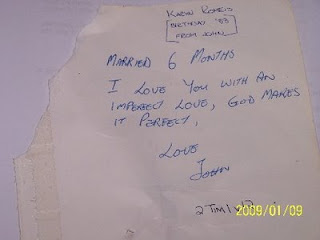 It has been everywhere with me, and survived the car accident that I believed in that moment was going to me my final curtain. Some days I have opened it at a certain page to find a sprinkling of sea sand, or a tiny piece of leaf.

You might think that its greatest value to me would be because it contains what I believe to be the Word of God. This is not so. I can buy another Bible. I can read the Bible on my phone, on my computer screen. There is no shortage of that. What makes it such a sore loss is (a) the circumstances under which it was given to me and (b) the personalisation of it over the space of two decades - I have annotated it heavily during sermons and private meditations (how very 2.0!).

I think Jessie understood that I was upset. She crawled on her belly to me and laid her paw across my arm. Apology accepted, girl - you weren't to know - but it doesn't make the loss hurt any the less for it.

Perhaps you can at least frame the inscribed page as a keepsake...

I plan to, thanks.