pic of the day - technology of yesteryear 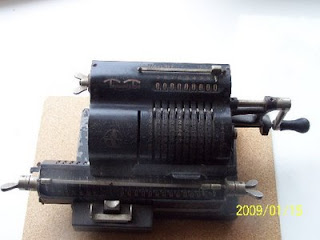 This is a Triumphator calculating machine. It belonged to my late father-in-law, who was born in 1916. Where he got it from, I couldn't say, but he may well have been its first owner - they date back to around 1910, I'm told. This one has a sticker on the bottom with the name of a supplier in Stockholm, which was where my father-in-law lived. It has a serial number on it. Why do I find that quaint?

It really works. It adds, subtracts, multiplies and divides. Our first landlord after we were married demonstrated it to me, but I can't remember the instructions - it WAS 20 years ago, after all!

It weighs a mere 5.6kg, according to my bathroom scale (mind you, my bathroom scale adds on 10kgs at least ;o) so it probably actually weighs about minus 4.4kgs), so there is no way you could call this a pocket calculator!

It may well be worth a fair amount of money, but there is no way my husband, an IT (and logistics) manager, is going to part with it! It's an early computer, after all!

I can remember when the first electronic calculators were demonstrated in the stores. My sisters and I oohed and ahhed over it. Fortunately, I was younger than them, so I was able to actually use it in school (whereas they had to learn how to use a slide rule).

Sometimes I think it is sad that we lose how to use these tools because there are some bits of knowledge that may be lost with it.

I wuoldn't have a clue how to use a slide rule. My grandfather used one frequently in his 'workshop' at home, and my first brother-in-law had to know how to use one for metal work. He's younger than I am, but by that time, only kids who did metal work and woodwork were using them.

This type of calculator was fairly common in accounting offices. I used a similar machine as late as the 1980's