On being a photographer... or not

Because of my pic of the day project, I tend to go everywhere with my large camera slung around my neck. Yes, I have an iPhone with a built in camera. I also have a teeny tiny camcorder which takes still shots. But I like my camera. It's nothing fancy, it's a Kodak EasyShareDX6490.

Because I walk my dog at roughly the same time every day, I encounter the same people regularly. And, in their English way, they went from walking past me, to acknowledging me, to greeting me, to asking me, "Are you a photographer?"

When I was chatting to some people about my early memories a few days ago, one said, "You should be a writer."

After all, I write this blog, as well as magazine articles and the occasional academic paper.

Do you have to earn your living at something to call yourself that thing? I guess not. But I'm pretty sure that's what most people think you mean. For example, I used to know a rather eccentric woman who referred to herself as a writer and a dancer. She wrote what I considered atrocious poetry and letters to magazine editors. And she performed what I regarded as rather graceless dances during worship time in church. It is entirely possible that I was being uncharitable and bitchy, and I don't mean to imply that she should have stopped doing any of those things that so obviously gave her so much pleasure. After all, she should do what she does for her, regardless of what intolerant, narrow people like me might think. Nevertheless, she will serve to illustrate my example. Is she or isn't she a dancer? A poet? A writer?

In the process of taking photos, like Barbara Ganley, I find that I am seeing things differently. That somewhere along the way, I have figured out how to take a halfway decent photo. I love this one, for example:

I notice that my younger son has a quirky way with the camera that I am only just becoing brave enough to try.

There are all sorts of reasons for this, but broadly, his empowerment occurs on two levels.

Firstly, apart from the fact that he probably started out with more natural talent than I have, he has grown up with a lot more 'yes you can' than I did. He has experienced encouragement at every turn and his off-the-wall wackiness has always been treated as a major plus rather than a social no-no, as it was by my own somewhat repressed family.

Secondly, on a more practical level, because he doesn't have to spend money on having his photos developed, there is no risk involved in taking failed photos. There is room for lots of process learning, rather than a purely results-focused approach. The first photos I ever took, I had a 12 exposure film, which I took in to the pharmacy for development. Only three of them were developed. I was so embarrassed when the pharmacist tried to give me some tips (with several other customers within earshot), that I ran out of the store. I felt as if I was being smirked at.

My son has never had to deal with that kind of humiliation. Courtesy of the digital equipment at his disposal, he gets to see his photos immediately and he can decide for himself what might work better. He can try several different approaches and see what works and what doesn't. He has taken so many photos of the sort that people buy from iStock to use in elearning and PowerPoint presos. He took this in a cafe right on the beachfront in Cape Town. See how the damp, salty air has formed a layer on the glass: 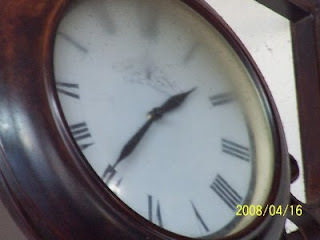 I don't know that I consider myself a photographer. But I have taken some pretty decent shots, especially lately.

Have I learnt to be creative? I don't think I would put it that way. I think I would say that I have learned practical skills on the one hand. On the other, I have developed the courage to give expression to creativity that I have always had.

Am I more creative than the next person? I honestly don't know the answer to this question. I know that I am creative-but-not-artistic. Candidly, some of the things I do are considerably better than other people's efforts in the same field. But perhaps they simply need to learn how to express their creativity better. Or perhaps their creativity is better expressed in other media (such as flower-arranging, where I have amply demonstrated my lack of skill).

What I do find is that I look at the world diferently at the moment, and am learning to find picturesqueness (is that even a word) if not beauty in unexpected places.

When I was in high school, I had an amazing Choir instructor, who took a student to task once:
"Do you play an instrument?" he asked her.
"I'm learning to play the Cello," she replied.
"Well. Do you play it or don't you?"
"I guess I do..."
"So then why would you say you're learning to play...at what point would you say you stop learning and start doing? I can't even make a noise on a Cello, so I would have to say 'I don't play'"

Not that there isn't value in being constantly open to learning - quite the opposite.
But if you use that as an exercise in needlessly minimizing yourself - what's the point?

We all had our paradigm shifted just a little that day.

Hmm. I see what you're getting at, and it's a valuable insight. I do think it's a slightly different issue, issue though. I am quite happy to say "I take photographs." Just as I would be prepared to concede that the lady I mentioned dances and writes. But at what point does someone who dances become a dancer, someone who takes photographs become a photographer, someone who plays the cello become a cellist?