pic of the day - scaffolding 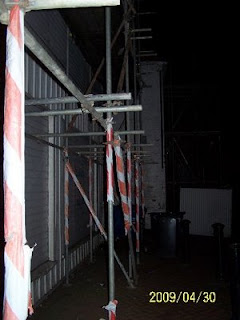 There's nothing quite like the frantic rush to do some or other last minute thing for school tomorrow, is there? Our younger son went to see a show with a school group as part of his drama curriculum. When we picked him up, we learned that his art teacher told him today that he has to produce pictures of scaffolding by tomorrow or get a yellow card.

Fortunately we had to pass several scaffolding installations on our way home, and fortunately I take my camera with me everywhere, so we manage to procure a few pics.

However, scaffolding in the dark might be quite what she was after, so we had to hit Morguefile when we got home. There was no stipulation that the photos had to have been taken by him. We also threw into the mix the photo I took of St Pancras earlier this year.

Surely that must be enough?

If not, tough. I'm not having my son working on homework at this time of the night. Until his 16th birthday he still has a bed time, and that was some time ago.