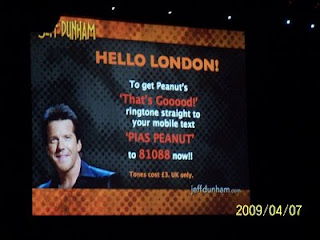 Woohoo! The day finally came. We got to see Jeff Dunham live at the Hammersmith Apollo last night. I gave my husband the tickets for his birthday all the way back in February.

It was Jeff Dunham's first (and only) show in England. I'm planning a post on it, so I won't say more now. Except that, in spite of all the notices banning photography in the auditorium, loads of people were doing exactly that, and the bright lights of their cameras and phones were quite distracting. As you can see, I also took one photo before the show started, for this feature.... and that was without a flash.

By the time we got home it was 2am, so I decided to wait until a more civilised hour before posting the picture... and get some sleep!