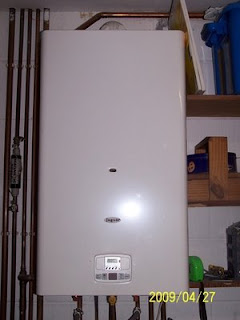 Blooming thing's on the fritz. We can get heat through the central heating radiators, but no hot water through the taps. Of course the plumber didn't come when he said he would. However, when I described the problem, he was pretty certain that the diversion valve was knackered. That sounds about right, so I gave him the make and model details so that he could order it and hit the ground running when he arrives.

His response (and I kid you not) was to suck his teeth and tell me that that kind of boiler is at least 15-20 years old. Considering that the boiler is in a part of the house that was only built 3 years ago, this seems highly unlikely.

Fortunately, in the boys' bathroom, there is an electric shower which is still running hot, so we are at least able to stay clean, you will be pleased to learn.