pic of the day - driving 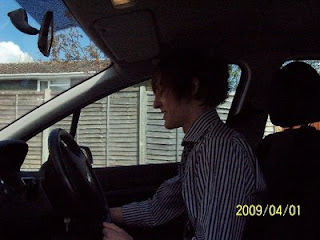 I don't know where the years went, but surely it just yesterday that a platinum blonde little boy was pushing a toy car around the floor of our house in that adorable-but-almost-forgotten big-bottomed way of babies who wear towelling nappies (I was too green for disposables!).

Today he drove to school. He doesn't have his licence yet, but he has a learner's permit, so he is allowed to drive with a licensed driver (yours truly) in the passenger seat, as long as there are no other passengers. Since every second Wednesday is ludicrously scheduled with just one lesson at fourth period, I let him drive the 9 miles to school, instead of dropping him off at the station. Then I pottered around the town until it was time for him to drive himself back home again.

Beautiful picture, first I thought it was you. I have been reading your posts. I have had a rough time at home lately and coming here is soothing for me. You inspire me as a mother and many times I reflect on these post when I am taking a decision for my kids. In so many ways the sharing across the web has shattered the stiff rules of traditional learning. I loved reading about your pottering around the town, that all mother's do in between the classes. In a strange way it is calming to see the common thread across motherhood. To a mother like me it brings joy to see companionship in the everyday work.