On making allowance for the other idiot 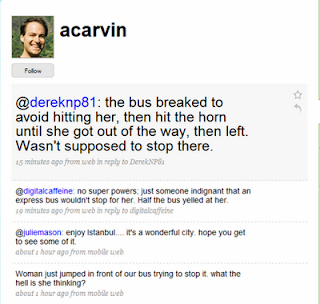 These tweets from Andy Carvin resonated with me. People are often so focused on the results they're after, that they don't consider the risk to other people... or even sometimes themselves.

Just recently, my elder son was driving in proper traffic for only about the 5th time ever. We were passing a school, when the 4X4 in front of us suddenly slammed on anchors, right in the traffic. The passenger door opened and a woman got out. Then, as her husband drove away, she ran across the road right in front of us.

Our car was plastered with L plates to alert people to the fact that the driver was a learner. From this, one should deduce that the driver is not yet confident or competent enough to be expected to cope with unpredictable behaviour. But I have been astonished, since we started down this particular path, how many people do stupid things right in front of a car which bears indications that this might be a poor life choice.

Can you imagine the psychological impact on a teenager who has knocked down and injured or killed a pedestrian? Or who has ploughed into the side of a car that has jumped the lights, only to learn that said car was carrying a baby in the back seat? My mother had the misfortune to knock down two children who ran out into the street in front of her car, killing one instantly. It was two years before she could drive down that road again... and she had to have me in the car at the time (I don't know why it is that people often declare themselves brave enough to do things they had previously been too afraid to try, when I am with them!). My mother had been driving for decades at the time, and she knew beyond a shadow of a doubt that she had not been to blame. In the same situation, my son would have neither advantage.

It occurs to me that learning to drive is not just about learning to control a vehicle. It is not even about learning to control a vehicle in traffic. It is about learning to respond to what my own driving teacher (decades ago) called 'the other idiot'. The traffic is not a single entity. It is a collection of other drivers in other vehicles, as well as pedestrians, cyclists and the odd animal. Each driver has certain skills and weaknesses, certain quirks and idiosyncracies. Each vehicle has certain strengths and weaknesses. Each pedestrian has their own issues and distractions - like the woman who stepped out in front of my car recently as she chatted on her mobile phone, blissfully unaware of the test to my reflexes and my car's brakes. Fortunately for her, both passed!

There is always context.

Yes, they should be figuring much of that out for themselves. But sadly, much teaching and corporate training doesn't encourage that kind of thought. We need to be different. We need to encourage and facilitate independent thought, whether our audience comprises adults or children. Whether we are delivering our learning face to face, online, 1:many, 1:1. Get people thinking, what does this mean to me? How am I going to use this? What other factors could have influence? What would I do then?

This means introducing far more questions into our andra/pedagogy.

My son is counting down with enthusiasm the day he will get his permit to learn to drive. He is the youngest of his friends, many of which are driving already. For me the countdown is dreaded.

Within a week of my getting my license, I was in a car accident which was not my fault. However, as you pointed out, had I been older I may have been able to avoid the accident or dealt with the aftermath. As it was, the person who hit me ended up in court, but not before I went through the trauma of being accused of backing up into him as I sat at a red light (which I would have had to change gears and gotten the car up to 40 miles per hour from a dead stop).

I was not afraid to drive after that because of my driving abilities, rather I learned a lesson about the dishonesty of some people, including the police (he had a friend on the police force that tried to change his records, but my parents were friends with the chief of police so this was discovered early on).

To this day, I am afraid of driving in snow during rush hour because of the other "idiot" who will drive too quickly, too close to my car, or too recklessly. I had heard of someone from this area (where snow is a common occurrence) who never had a car accident in the snow when he lived in this area, but had 4 accidents the year he moved down south because the drivers did not know how to drive in snow on the rare occasions there was snow on the ground!

@Virginia I empathise. I had an accident the day after getting my licence. The girl across the road (also a new driver) and I were reversing out of our drives at the same time.

She reversed clean across the road and hit me (rear end to rear end) while I was still in my drive.

Her Dad leapt out of the passenger seat, tugged at the boot (trunk) lid and said "Boot's b*ggered."

Two days later he came and handed me a quote for repairs which he said I should settle. I told him he should take it to his insurance company as I had done with mine. He was adamant that it was my problem, so I took it to my insurance company, and pointed out, using a picture of the damage to my car that, having sustained a broken tail light and a small dent, it was unlikely that I could have caused the string of things that were wrong with his car, including damage to the front of the car. I had also found out that the boot had been 'b*ggered' for months!

My insurance company took the matter up with his and they took him to task over fraudulent claims and refused to cover the work. They also refused to carry his policy any longer.

He came and threatened me, can you believe it? But he didn't have a leg to stand on.