Just in case you missed in on Twitter and Facebook, where I have trumpeted the news, today is Harold Jarche's birthday. It is a very important birthday, too. Let me give you a hint in the form of an image lifted from the (very impolite) birthday greeting I sent him. 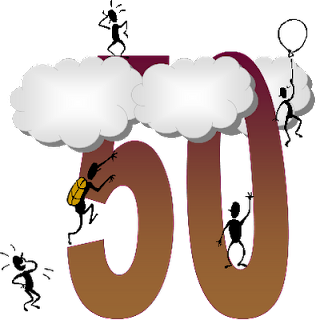 So let me pay a birthday tribute to someone who has become a friend.

I have never actually met Harold. We recently chatted via Skype and realised with some surprise that this was the first time we had actually conversed socially in a synchronous setting. When I was introduced to the world of blogging, Harold's was one of the first blogs I read. I don't know how I came to hear about him. His might have been one of the blogs recommended by the person who opened up this whole vista to me in the first place. His blog is still one that I read every day.

There are issues on which we disagree, but that disagreement has always been rationally and amicably discussed. It has never degenerated into the sort of unpleasantness which rears its head from time to time, even in this usually civilised space.

In fact, one of my earliest memories of Harold involves just such an incident. I got lambasted by another commenter on one of Harold's posts, and, to my astonishment, got an email from Harold, apologising for the treatment I had received. I was touched by his concern and decided that he was a Nice Man.

This view was in no way damaged by pictures of Harold. Now don't go reading anything silly into that statement. I defy you to tell me that this is not the face of a Nice Man! I know you're not supposed to judge a book by its cover, but I also know that we all do exactly that much of the time!

Harold is unstintingly generous and supportive of the members of his wide network. He has offered to help me draw up proposals, and I recently saw a tweet from him in which he offered to help someone else write a report.

Harold is a principled man whose integrity is worth a great deal to him.

Oh, and I can't help it, but a person who speaks with pride about their spouse to someone whose opinion doesn't matter, scores extra brownie points with me. I have learnt (from him) that his wife is generous, kind and talented. He has shared links to some of her endeavours, and I concur at least with the last of those (I don't have any foundation for an opinion on the first two, as yet). He speaks with pride about the achievements of his children, too. So family obviously matters to him and, since I am of the view that the gradual disappearance of the family unit is largely at the heart of much that is wrong with society today, this earns him extra points in my book.

Perhaps the day will come when Harold and I finally meet in person and I am pretty certain that will be a hug moment, rather than a handshake moment. Even if that day never comes, I count him among my friends. Not in the sense of a Facebook friend, but in the sense of a person whose welfare matters to me.

So swing by his blog and inundate him with birthday wishes, I double dare you!

Thank you for the very kind words, Karyn. I think I was blushing as I read this.

Anyway, here's a virtual hug and someday I too hope we'll get a chance to meet in person.

Thanks for making my 49+1 birthday very special :-)