pic of the day - a boy runs 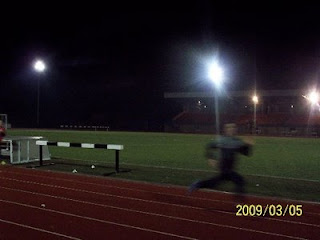 I tried so hard to get a decent shot of my elder son practising sprints tonight, but I failed miserably, even though I set my camera to 'sports'. This was the best I could do. However, I also managed to capture him on video.

He has been so miserable lately. Having gone from Mr Popular to whom his bullied little brother turned for succour and support, he has become the target of victimisation in his own turn at the new school. Largely because he is so very sporty and competitive. It was such a pleasure to watch him run tonight. Unlike longer distances, there is no space for thinking in a sprint. It's just all about getting those arms and legs moving as fast as you can so that you can get across that finish line as quickly as possible!

Oh... and whoever it was who twittered me recently to say you'd love to hear me laugh (later edit: I believe it was Clark Quinn) - you can just catch the raucous sound on the very end of this (short) video. The shout that made me laugh was not an expletive but one of the sprinters shouting "Track!" which is how one clears the track ahead of dawdlers during a practice. (Later edit: what was funny about that was that there was no-one on the track - he shouted as a force of habit)