pic of the day - glass 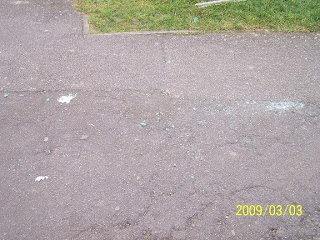 One of the unfortunate but inevitable results of an economic downturn is an increase in vandalism as the dispossessed vent their anger. One of the ways in which this anger is expressed in my town (a town which was pretty low down the economic food chain to begin with, and has been hard hit) is that broken glass has appeared all over the pavements.

This photo was taken this morning as I walked my dog. It is one end of a pedestrian walkway between two houses. The entire walkway is so littered with glass shards as to make it almost impossible for an unshod, four footed beastie to avoid stepping on several. There is another area - the parking lot of a thoroughly vandalised, abandoned parade of shops - where the glass is so bad that, even with my agonised shoulder, I carry my 26kg dog for 20metres.

You might ask why I don't take a different route, to which I have to answer, to my sorrow, that every route to the park where I can let my dog off the leash for a few precious minutes is equally littered. The council assured me, when I phoned yesterday, that it would be cleared up within 24 hours.