pic of the day - recession 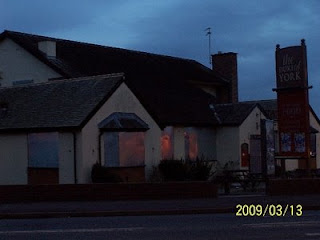 The Duke of York pub is a landmark in our town, sitting as it does at the intersection of two major roads. Official bus routes refer to it, as do traffic reports.

It has fallen victim, like many other pubs in the town. Unfortunately, because the recession has also meant an increase in vandalism, the windows have been covered over with sheet metal.